So, as of today, it looks like Vistaprint has thrown its hat into the ring with likes of Yext and other local listing providers. Let’s check out what they have to offer…

What is Vistaprint Local Listings?

Vistaprint Local Listings offers to list you on Google, Bing, AOL, Yahoo, Yelp, YP.com and “hundreds of other sites” as well as over 100+ other local search directories. They’ll take these sites and submit to them your local business information, such as business name, address, phone, website and more. You should receive your own page with this information on each of these websites.

How Much Does Vistaprint Local Listings Cost?

Vistaprint Local Listings charges $10 a month. As of this writing it seems like your first month is free and you can use the coupon code “BIZSAVE” and get 33% off when you do eventually have to pay. I’m not sure if that’s just a one month discount or a lifetime discount. You can cancel before you first month is up and not have to pay. In fact, I signed up for it and cancelled within an hour and they didn’t bat an eyelash.

Is Vistaprint Local Listings Worth It?

The early return seems to be that while it is very inexpensive, the value doesn’t seem to be very high. You can get yourself on Google, Bing, Yahoo, Yelp, and YP.com all for free, without any help. And the “hundreds of other sites”? Vistaprint uses a data company called Neustar Localeze for that. When you submit your business info to Vistaprint, all Vistaprint does is turn around and submit your business info to Neustar Localeze, who pushes it out to those 100+ websites.

So, with your $10 a month, all you’re really doing is buying a few listings you can get for free (Google, Bing, AOL, Yahoo, Yelp, YP.com) and a submission to Neustar Localeze which you can actually get for less than $120 (more on this later), which is what Vistaprint would charge you for a year .

How Does Vistaprint Local Listings Work – An Honest Review

As Vistaprint Local Listings is really 2 services, let’s split them up into a review of both services separately.

As a part of Vistaprint’s Local Listings, they will put your business info on Google, Bing, AOL, Yahoo, Yelp, and YP.com.

The catch here, which I mentioned before, is these are already free for you to sign up for on your own (except AOL, more on that in a second).

In fact, here are the links to publish your local business on each one, sans AOL. Have at it:

The reason AOL isn’t on that list is because I don’t know what Vistaprint means by they’ll submit you to AOL.

AOL’s local search engine is long defunct and no longer accepts submissions. The only thing I can think of is that because AOL’s web search is actually run by Google (AOL signed an agreement with Google awhile back to show Google search results on AOL’s search engine and in return they get a share from the ad profits) they can technically claim they put you on AOL. I guess the thinking goes, “If we put you on Google, and AOL shows Google search results, then you’ll show up on AOL, and technically we put you there,” which honestly sounds like a word problem I would have attempted (completed is another story) in high school algebra and therefore, threatens to give me a headache. Even if that is the case, you can get yourself on AOL too. Just…sign up for Google.

Also, not to mention, in a screenshot provided here by Vistaprint, you can see both Google and Yahoo take up to 60 days to process if you go through Vistaprint. If that’s true, not only are you paying for something you can get for free, but you’re also paying for a longer confirmation process.

On other other hand, do it yourself and with Google you can be verified in seconds if they already have your information. You can claim it through the link above and phone verify and boom, you’re good to go. If Google doesn’t have your info, you can add it but they’ll make you verify through a postcard in the mail. But even Google’s 1-2 week turnaround time with the postcard is quicker than Vistaprint’s “up to 60 days”.

With Yahoo, you probably are looking at between 30-60 days if you DIY though. So, while the time frame is the same, DIY is free, Vistaprint costs money.

Can You Keep Your Listings?

Wow, I’m Depressed. Are There Any Pros?

Enough of the cons, what about the pros? Really, the only pro I can find for Vistaprint is that you only have to fill out your profile once, saving you some time. But its it enough time to justify the cost? Also, if they delete your listings when you cancel, then you either have to pay them forever or risk losing your listings. Effectively, you’re bound in a contract. That’s not cool.

So, is Vistaprint Local Listings worth the money when it comes to Google, Bing, AOL, Yahoo, Yelp, and YP.com?

I’ll let you draw your own conclusions.

Beyond listing you on Google, Bing, AOL, Yahoo, Yelp, and YP.com, don’t forget Vistaprint Local Listings will list you on Neustar Localeze as well. This is the service, if you don’t remember, that Vistaprint uses so they can say they put you on “100+ local listings”.

Neustar Localeze is actually an important service to have.

So, that sounds pretty good, right? One service putting you on 100’s of local search directories?

A subscription from Neustar Localeze directly will cost you $300 a year. So, Vistaprint at $120 annually ($10 per month for 12 months) is a score there. However, there’s another service out there that will not only submit you to Neustar Localeze, but also to the other 3 LBDA’s we talked about (InfoUSA, Acxiom, Factual) as well as a few local listing directories too (Bing, FourSquare, Citysearch, Insider Pages, Best of the Web, Superpages) for only $84 a year. That service is Moz Local.

As a Local SEO company helping many, many local businesses with their ranking on Google, we use Moz Local all the time, with zero complaints. In fact, it’s normally the first thing we do for our clients.

It’s a much more superior product, for less.

Now, you have another option.

If you’re trying to figure out if VistaPrint Local Listings is really worth it, I think you have your answer right here:

I’ll let you make your own decision from here but for myself, I will not be using Vistaprint Local Listings. Currently, there are just better options out there.

However, I would love to see a dashboard with these 100+ local listing directories and direct links to your business listing on them. If they could make that improvement, I think it would easily be worth the money.

But that’s just me. 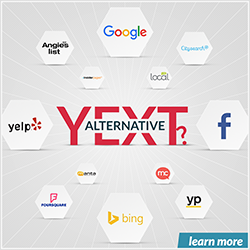